Gadgematch 3: Buy a new PC vs. Build Your Own System

Preface: I’m going to alter the Gadgematch approach ever so slightly this week to cover the recent decision I had; Buy a new desktop PC or build my own system. With respect to the masses that probably wouldn’t think about or dare to build their own system, I hope to cover my decision with a bit of a tutorial-like twist and detail the supplies and steps you will need to build your own system. 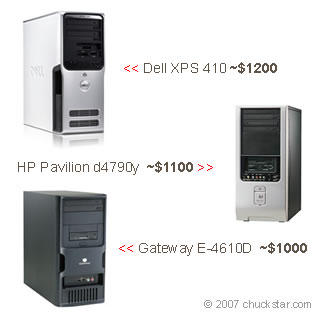 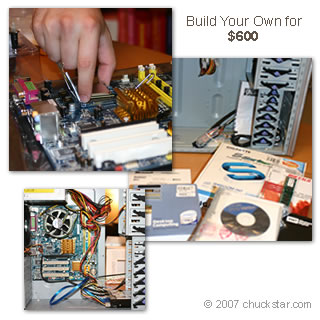 Gadgematch#3: Buy a pre-built system from Dell/HP/Gateway or build my own PC.

When the power supply died on my discontinued Dell Dimension 4700C, I had no real options but to see if Fry’s or MicroCenter could sell me a replacement. I learned a hard lesson that because it was a Dell, it was custom and the form factor could not support any readily available accessories. I had a choice to either buy a new system, and potentially run into the same issue in 2 years, or build my own. I took a heavy look at my options, which I often do.

The Dell 4700C was a slim line form factor, chosen because its small size gave us much more desk space. Surprisingly, there aren’t many more options today for the slim PC than there were 2 years ago. HP makes a nice, somewhat affordable model and Dell’s new version of what I had is much improved. But I was worried I’d run into the same problem when something went wrong with that system. So, I explored the more standard mid-size tower options. As pictured above, I looked at the following models:

After nearly committing to spending $1000 on a new PC, I went back to MicroCenter one last time to try and get a new power supply. While looking through the components section of the store (aptly named “BYOPC”), I couldn’t help but begin checking out prices of computer parts. Matching spec for spec as close as I could to the systems above, I was actually able to piece together a system for under $600. Here’s the grocery list:

So, if you’ve never built a system, you’re probably wondering how to put it together. Here are the simple steps I follow. Those with experience should be able to complete this in about 30-45 minutes. It can get very easy!
* These steps are not meant to be followed exactly and if you’ve never built a system before, you should find someone you know that has first. I won’t be able to support you, but please let me know if you choose to build your own system and succeed as a result of this post.

Believe it or not, these are the only steps I followed this time around. Building your own system has gotten dramatically easier in such a short time. It had been nearly 4 years since I built my own system.

Conclusion: Building a system can me intimidating and inconvenient, but also tremendous fun. It’s basically like ordering a delivery pizza vs. buying your own ingredients (like at Trader Joe’s, or TJ’s as my colleague Allen would say) and cooking it yourself. The result can be gratifying for budget and ego. You have control over how much or little technology you add. Every time you use the PC, you have a certain pride in knowing you built the computer and know it like no one else.

Stores like MicroCenter and Fry’s make it so easy to ‘grocery shop’ for system components, and after putting the pieces together, the Bios and OS software are so smart these days, there’s really very little you need to do once it’s all together.