Gadgematch 5: My first 24 hours with the new Motorola Q 9m 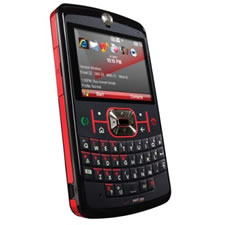 I just purchased my first new phone in almost 2 years. The successor to my Samsung i730 had a big footprint to fill in my gadget portfolio. Of course, one of my goals was to slim that footprint down to a phone that wouldn’t make me lean too much to one side when I put it in my pocket.

Browsing through the Verizon store just this past week, I was pleasantly surprised to discover a new, improved and kick ass looking Motorola Q 9m. I had shied away from the original (and sleeker black) Moto Q when it was originally released (see Gadgematch post) since it didn’t look like too sturdy of a phone. Plus, the Moto Q was — and still is — missing a touch screen, a feature I thought I couldn’t live without.

My i730 just wasn’t surviving anymore, shutting itself off automatically and not even picking up calls when they came in. I had been holding out for the long-awaited Samsung i760 which was announced at CES back in January, but while the Verizon store folks are happy to show off their dummy prototype, they have no clue when the i760 will actually hit shelves.

So I plunged for the Q, and in my first 24 hours with the spanking new phone, here are my top 5 favorite features that I’ve enjoyed with the new gadget:

1. Wireless connection on my laptop anywhere I go!

That’s right, like almost every new (Windows Mobile) Smartphone, the new Moto Q can be used as a ‘tethered device’. This means that you connect the phone via USB, but instead of sync-ing, you launch Verizon’s VZ Manager and establish an internet connection through the phone. And since it’s Verizon’s EVDO, it is super fast. I’ve already used it for fun and work purposes, and gave a 20 minute presentation using the very reliable AND fast network… all through my new phone!

Despite the technology having been around now for 7+ years, the Q is my first camera phone. And more importantly than being able to take photos, I can actually receive them. The i730 could not receive photos by mms message, which is a feature I just can’t imagine any modern phone not being able to do. Take it from someone who has a 6 month old baby, being able to receive photos from my wife of Chase smiling during the day is a great joy of life!

3. Assign photos to my contacts.

Yes, I know this one’s been around for a while. But in the Windows Mobile world it’s been a rare thing. When someone calls, and if they are in my contacts, and if I’ve assigned them a photo, I will see their picture when they call. I’m not sure which version of Windows Mobile added this, but WM6 has it and I think it’s great.

So, in addition to having a personal photo come up when someone calls, I can also choose any MP3 file (that I’ve moved on to the phone) as the ringtone for that caller. It’s a super fun feature and since the phone is so easy to sync, I can just drag over any mp3 I’ve made or purchased to the phone. It sounds great too!

5. Small and light, compact and sleek.

The phone is super thin, about a third of the chunkiness of the i730 and a shade lighter than the Apple iPhone. I ordered the OEM leather case for the phone and it fits like a glove and adds almost no weight or girth to the phone. The attached belt clip even has little chrome guide at the edges, so it easily slips on the belt and stays on securely.

Somehow, after rebates and contract renewal discounts, this awesome phone is only going to cost me $99. Given that I paid $599 for the i730, this is a huge deal.

My message here is not to sell you on this device, but in Gadgematch style, confirm that I made the right choice for my needs by buying the new Motorola Q 9m over the Palm Treo, older Q and even Apple iPhone. And that old touch-screen feature I had for 2 years… I don’t seem to be missing that at all.