It seems like a long time ago when I first announced that I, along with co-authors Sir Keith Peters, Clint Modien and Ryan Manning, was busy writing Wrox’s Professional Apollo book. The book’s listing has long since changed to a more accurate, solid and extremely competitive title of: Professional AIR: Application Development for the Adobe Integrated Runtime.

And with the release of AIR being pushed out to Spring 2008, the earliest, the book’s release has been updated to match the platform’s new launch. It is currently listed as February 19, 2008 on Amazon.com and should soon update on bn.com.

So that leaves the cover, which to this point has not yet been updated to feature all four authors. I am hoping the new cover is released well in time for MAX as it will accurately feature all 4 lead authors on the book. As a bit of a preview, I have included in this post (below, with permission from super photographer Jared Charney) some candid shots taken during the cover photo shoot back in June. Yes, it’s ok to laugh, just as long as you’ve pre-ordered the book! 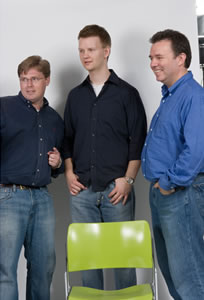 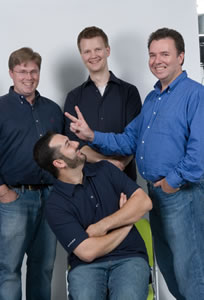 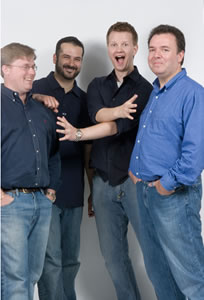 * Note these photos are in no way close to what the cover will actually look like. From left to right, Ryan Manning, me, Chuck Freedman (wearing Oakley), Clint Modien and Sir Keith Peters.