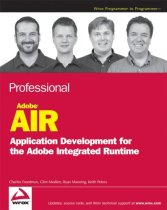 Our editors at Wrox were understanding enough when we told them that until the AIR APIs were a bit more frozen, we really weren’t going to make too much forward progress on the book. Now that beta 3 is out, and since we’ve all been told that the APIs are now as frozen as they can be, it’s time to get back to writing.

Having already personally written 3 chapters, it’s going to be no small task to go back and review those chapters. So, I’ve chosen to move forward with new chapters first. The chapter I’m writing now has me catching up quite a bit about what I consider to be the ultimate desktop/OS integration of AIR.

System tray icons, docking and menus are by the far the most exciting aspects of AIR to me yet. I’ve done thorough coding with SQL lite, online/offline detection and windowing. It’s the ability to really get into the desktop integration by placing a system tray or dock icon in the OS that, to me, feels like I’m really coding a desktop app with a real desktop presence.

You won’t find much code out there on how to do this. And adding system icons, docking/undocking an app and other related features still have many quirks that I don’t think will be ironed out at this stage. I feel, though, I have a pretty good handle on it and after a few weeks of coding I’m ready to start capturing the code in this new chapter. As soon as I’m done, I’ll start sharing some good code on the topic.

If you’ve done some icon/dock related AIR code, please comment and post a link to it. I have a feeling this is going to be a really hot and exciting feature for AIR once more folks start playing with it!