So many know me as a die-hard Red Sox fan. After the Sox won the World Series this past season, many were kindly contacting me with congrats. They knew how special that was for me!

Now that the Celtics are in the Finals, my place as a Boston basketball fan has been called into question. It’s true that for the better part of 15 years, I haven’t really followed the team. But back in the 80’s, growing up near Boston, it was everything Celtics.

My Uncle Alan, with season tickets, was great enough to take me to A LOT of games — and I was a Celtics fan long before I fell in love with Fenway Park and the Red Sox. A huge contributing factor to me being a Celtics fan was a rare and valuable connection my uncle had at the old Boston Garden. He happened to be very good friends with the late, great Celtics court side photographer Dick Raphael (who sadly passed away just last year). Mr. Raphael, who ended up being one of my first paying customers when I started out doing web design in 1996, was also gracious enough to take a few ‘special’ photos of me. 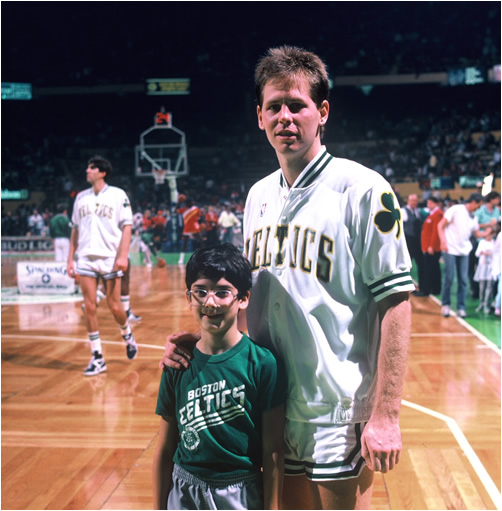 This photo, recently dug up from the Chuck Freedman archives, is of me at the age of 10 with then Celtics shooting guard, #44 Danny Ainge. The photo was taken on the historic parque floor of the old Boston Garden in 1987, the last year the Celtics were in the Finals during the 80s dynasty. Danny Ainge is now the Executive Director of Operations for the Celtics and is credited with building the championship caliber team that is the 2007-08 Boston Celtics.

By producing this 21 year-old photo as evidence, I hereby establish my true Boston sports heritage and prove, once and for all, my status as a true Boston Celtics fan. Thanks to Uncle Alan for making sure of that.