Preface: Pardon my interruption on blogging about Flash, Apollo and my new baby. Consumer Electronics is a big part of me, spending my Saturdays growing up in the setting of my dad’s electronics and appliance store. I’ve advised many friends on what digital camera, TV, computer, phone and game console to buy. As I narrow down my own buying decisions, I’m going to post them in the ultimate Gadgematch. 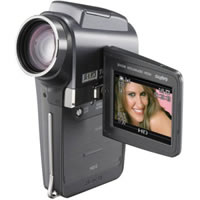 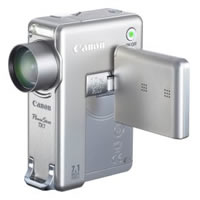 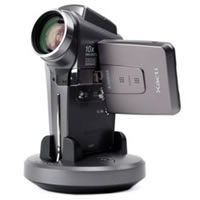 Gadgematch#1, which compact DV/Digital Still Hybrid Camera is best for me? Featuring the Sanyo HD2, Canon TX1 and Sanyo HD1.

Sanyo HD1 ($500) has been out for nearly a year now. It’s cutting edge, sleek, super-compact and sexy. Oh, and I should mention I’ve owned one since July of 2006. With a new version out and a competing model now from Canon, what’s my next move?

I have enjoyed it the HD1 and have only a few issues with its performance. On the good side, and this speaks volumes, I don’t think I would have shot half the video or photos I have in the last 9 months without it. What does that mean, you ask? The thing is small and small enough to take anywhere and not have to think about it. Have camera will travel. Have super small and light camera, and you’ll travel AND take lots of video.

If you want to get video on your PC, look no further. Over miniDV, it rules. Every time you start and stop the camera, a new file is written to your SD card. So when you sync the camera (directly or through the docking station) you can view/edit scenes quickly without having to use an antiquated firewire cable.

So what issues do I have?

Focusing and low light are a bit challenging. Only recently did I learn that you can ‘lock’ the auto focus to prevent it from trying to change focus while you’re shooting. This was causing an annoying blur for no reason. Seems to be much better now, but probably something that could be handled better. Low light is another issue, so I’m either avoiding shooting when it’s too dark, or constantly moving my subject(s) to a better lit area.

Would I buy it again? YES, yes and yes. It was so nice to have it in the hospital when our baby was born and it got the job done. Small enough to hold in one hand while I held my wife’s hand in the other. Everyone’s favorite feature is the fact that it starts up on a dime whenever your flip the LCD screen out.

A new camera from Canon, the TX1 ($500), represents an interesting option. I’m a Canon brand loyalist and if this model existed back when I bought the HD1, I probably would have instantly opted for the Canon. My brand loyalty gives me an instant bias as to quality and functionality expectations. While I love the style of the Sanyo, just look at that retro look of the TX1. I’ve heard it compared to a Super 8 camera, but who really cares, it just looks super sharp. There are a couple of features that make this a huge winner. Like the HD2, this one ups the still resolution to 7 MP. The more impressive added feature is optical image stabilization, a problem solver if you shake the camera or shoot in windy conditions. Another neat feature is a built-in lens cover, something that the HD1 annoyingly lacks.

Conclusion: The deck is definitely stacked in Canon’s favor here. While I love my HD1, if it’s love at first sight when I first pick up the Canon, once it’s on shelves in June, I will likely be trading up.

Coming Up: In the next Gadgematch I will compare a pair of mobile phones I am considering against my Samsung i730.