Why is FACEBOOK trying to sell me a chick for a dollar?

I think social networking has crossed over form the useful to the absurd. I understand they’ve got money to make and that certain functionalities and terminologies are being dumbed-down a bit to appeal to a more mass market. Take for example this stupid and useless ad facebook has chosen to display to me. 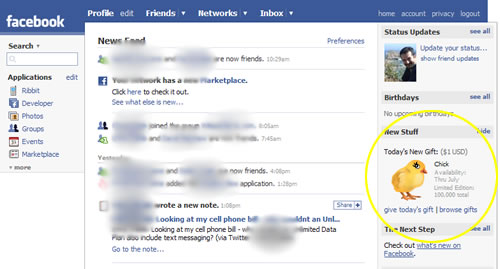 Under “New Stuff”, a feature I would assume facebook would use to showcase a new or advanced feature, facebook is displaying instead “Today’s New Gift”. And that ‘gift’ is a highly detailed, yellow-textured image of a baby duck. Yes, for $1, I can be the proud owner of an artist’s rendering of a chick. And in QVC-style fashion, I better act now, because the Chick (rather the image of) is limited to 100,000. DO YOU REALIZE that if facebook sells out of this precious, limited quantity chick, that they’ve made $100,000 off of this image. It’s genius, and it pisses me off.

First off, why would facebook show me this ad, disguised as a new feature? In my small list of friends (my facebook account was created to explore their development platform a few months ago, so I have not been nor intend to be aggressive in building my friends list) there is no one under the age of 10 that would want this chick image. So, I ask again, why does facebook display this to me?

Secondly, I clicked on the Chick and saw an additional 27 more images. That’s wasn’t the end of it. There were 9 pages total of these images (excuse me, gifts), each representing a similar chunk of revenue for facebook amounting to $100K per image.

And finally, many of the images were actually SOLD OUT. Are you kidding me? Who is paying $1 to buy these images? How could this be?

I’ve resolved to some rather peaceful explanation behind this. Today’s virtual stickers (that’s what I’m cleverly calling these facebook images) are to young folks now what hood ornaments were in the 70’s, what bumper stickers on Trapper-Keepers were in the 80’s, what POG’s and Pokimon were to the 90’s and what ringtones were last year. It’s a new generation’s way of decorating their lifestyle, or to put it in other terms, tricking themselves out.

This is also true for the highly customization of some web 2.0 sites, or the RockYou.com-like services that let you add media and slideshows to your mySpace page. It’s an element of expression. Just don’t send me a $1 image, or I’ll delete it.

This post brought to you by someone who, as a young lad, blew many allowances on 3.5 by 2.5 pieces of thin cardboard with baseball player’s photos on them. My rational was simple; get them while they’re limited.