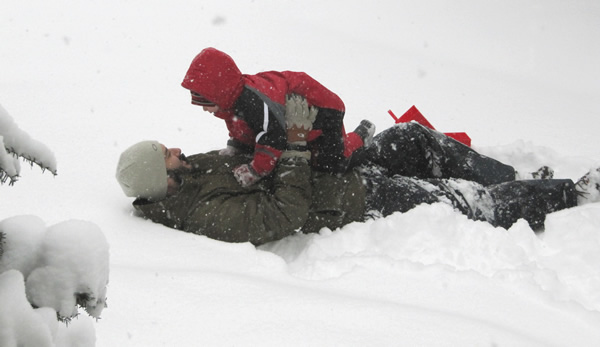 It’s Sunday morning, January 3, and I’m on a natural sugar high after drinking a cup of Cran-Peach juice from Massachusetts-based Ocean Spray. I wanted to be in the most positive frame of mind (not easy when my Celtics lose 3 in-a-row to end the year / but easier when you wake up to relaxing snow powder wrapped around your house and trees like Mother nature’s cold, yet warm blanket). So here is a recap of my personal and technical wins of 2009, in chronological order…

1. WIN > Successfully and safely relocated my family from the West to East coast.

After just over 3 years in CA, we moved back to and settled in MA. The combination of family, friends and affordability were leading factors. Since both my wife and I grew up in MA, our childhood memories were so engrained that it became too challenging to see us raising our family without the key elements back here we were so fond of. After one year, we are totally settled in our home and are very happy with the decision.

As the story goes, it was mid-March and I had reached a limit with the microphone capabilities of Flash. After bumping into friend and former colleague Justin Church at MIX in Las Vegas, I was encouraged to launch getMicrophone.com and lead a community campaign urging Adobe to add open Microphone to Flash. 6 months later, Adobe demoed open microphone features in AIR (at Flash on the Beach), followed by the announcement and release of open microphone in Flash Player 10.1 (at MAX). Huge win and fun effort.

3. WIN > Coded and presented my own project at Flash on the Beach and MAX.

The reasons behind this really deserve and will get their own post. After 4 years of presenting and evangelizing my work-related platform and applications at Flash conferences, I grew the desire and inspiration to show off my own stuff. Not that I didn’t have fun doing my job, but between Yahoo Maps and Ribbit, I started to long for the ability to share my own ideas and build something from scratch. Just in time for the big shows in Brighton and LA in October, I completed something I had wanted to do for years. My project used a stereo microphone C# based application to control a Flash UI, using the distinct left and right audio channels to move a stick figure from one of the screen to another. It was a lot of fun and allowed me to connect with my audiences in a whole new way.

4. WIN > Transitioned into a new role with a new company.

The 2.5 years I spent at Ribbit was my 2nd longest tenure at any company in my career. It was by far the most rewarding, for many reasons. An interest in the mobile space and the desire to work with a device-based platform led me to accept a position with litl as Chief Channel Evangelist. We are still a few months away from releasing our SDK, but it should create a wonderful new opportunity for Flash content and the developer community.

5. WIN > Safely traveled nearly 40 flights, to 18 cities and towns in 3 countries, for nearly 20 conferences and user groups, while staying in over 20 hotels.

2009 was definitely the year of unprecedented travel for me. I was making 3 trips a month at some points and spoke/presented at nearly a few dozen events. I got to travel to the UK for the first time in 11 years, since my semester abroad in 1998. From new conferences like Flash on Tap, to the always special FITC and MAX, to my appearance at Flash on the Beach, I really enjoyed getting to know the other speakers more and now consider several colleagues and friends.

BONUS WIN > Led RIA/Flash Community to raise over $3200 for Marine’s Toys for Tots.

Since this is so recent, I’ll keep it short. I’m overwhelmed at the response for the community. Many of the most respected developers in the business contributed and participated. Some of my favorite people and agencies really stepped up with big donations. Total win for the community and for kids who, I’m sure, got loads of cool toys as a result of this beard growing effort!

So, 2009 will go down as an extra special year covering many personal and technical achievements.
As I look ahead, there are so many things I can’t wait to do this coming year. At litl, we’ll launch a new platform that should revive ‘flash’ content in the form of engaging channels on our device. I’ve also taken the assignment of tech reviewing a new Flex 4 book, which should help me to sharpen my coding skills. As for conferences and travel, I expect to do quite a bit and hope to mix my evangelism with some of my own potions.

I wish all a happy and prosperous New Year.

1 thought on “Lots of personal and technical wins in 2009”