Why were there exciting Flash Lite devices at 2010 CES?

We are just a few weeks removed from an Adobe/developer cage match, where Adobe’s mobile strategy was bashed and Flash Lite, in particular, was called all sorts of nasty names. No matter what you feel about Flash Lite, you have to agree that is has all but been deprecated (at least on devices that can handle more) with the announcement and soon-to-be-released Flash Player 10.1 for mobile devices.

So, why were there not one by three buzzworthy gadgets running Flash Lite at the recent 2010 CES? While I discuss each device, ask yourself the following: Do these devices represent a resurrection of the 4 year old mobile player? Are they only using Flash Lite because of hardware restrictions? Do the makers of these devices see potential in the AS2 developer community? Is Flash Lite just being used as a placeholder until 10.1 becomes available?

Contrary to CNET’s errant post, Sony is extending (not competing with) Chumby’s OS. It’s a huge surprise. This is like a major network (NBC, CBS, etc) announcing they are syndicating a Spike TV show. Sony must really be impressed with the performance and abundance of widgets on the Chumby platform. They licensed it and built a whole new stylish shell around it. The device lists for $199, about twice the cost of Chumby’s own offering. As an avid Sony alarm clock owner, I hope Chumby makes it to the Dream Machine. The big question remains… in licensing Chumby OS for the Dash, does Sony know Flash Lite/AS2 is on the way out? Chumby’s 1500 applications certainly don’t say that.

UPDATE (1/12): Sony will ultimately release its own SDK. Not clear whether this will extend Flash Lite and/or Chumby OS, but pretty interesting. 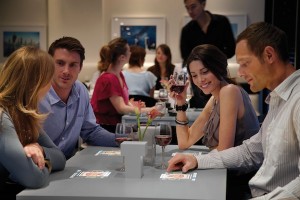 The Light Touch looks like the future. I mean, it actually likes like Jetsons/Star Trek stuff. It projects a touchscreen-able color image on a flat surface. The app that generates the display, we come to find out, is powered by Flash Lite. Again, Light Blue Optics sees the potential out there where Flash developers will code AS2 apps for this device. It’s not too far fetched, and @peterelst confirms that if you build a cool device, no matter what the language, developers will come. So if you’re a Flash developer out there, having long since retired your AS2 cookbook, and Cheesecake factory wants to pay you to write a Light Touch menu app, what do you say?

The best part about this product is the way we see it being used in the photos. I love that the device takes on a different look and physical application based on where it’s being used. Not exactly a ‘consumer’ product in the sense that it seems more aimed towards businesses.

litl’s Easel
[Disclaimer: I am the Chief Channel Evangelist for litl.] 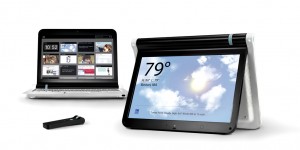 Intel invited litl to showcase the device at its booth. At the show others reported about how unique the device is. litl’s use of Flash Lite, as the standalone player for its channel apps makes it one of, if not the largest display (12 inch screen) for the mobile player. In addition to alarm clocks and egg timer widgety apps, the release of the Facebook channel ushers in the reality of more AIR-like Flash Lite apps. The Facebook channel seems to defy the convention of how AS2/Flash Lite apps have appeared and functioned.

litl’s hardware alone suggests even more so that Flash Lite should only be a placeholder until 10.1 is available for it. There is no SDK available yet, but, along with the other devices, the opportunities for content/service providers and 3rd party developers is clear via a unique device with a growing user base.