The first and only time I’ve been to the great Consumer Electronics Show in Las Vegas was 1996. My dad brought me during his remarkable streak (he went to them about 20 years in a row). 1996 was an incredible year in the consumer electronics space. At that show, the following were unveiled for the first time. I remember it like yesterday:

1. Plasma TV – Sony had a limited-access display behind a curtain where they showed about 3 models of varying sizes of plasma TVs. I had never seen a TV so thin.
2. MiniDV – I remember JVC had this tiny (by 90s standards) video camera which took a small digital cassette tape. It was an amazing standard, and I got to play with a few.
3. DVD – I still have a demo DVD disc from the Toshiba booth where we watched a presentation on how the new Digital Versatile (not yet Video) disc would change the way we moved data from computer to TV.
4. StarTac – Motorola had a museum exhibit-style booth where you had to line up to see their tiny (by 90s standards) pocket-sized cell phone.

So now, 14 years later, I will finally return. Litl is sending me to check out what will surely be no shortage of exciting platforms on display by every single major TV maker. I’m most interested to see how each company positions its platform — what apps will they show — what content partners will be showcased — how have they integrated new interfaces into their TV — are they doing widgets (a la Yahoo!’s Connected TV) or full screen, immersive apps — what opportunities are there for developers.. and more. [I’m exploring a new way to communicate my findings, so stay tuned.]

Anyway, if you’re going to CES, let me know and we’ll get together in Vegas. See you, and the future of the connected home, there! 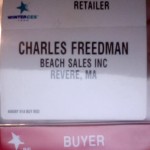 1 thought on “Returning to CES”