Managing photos on vacation with an iPad 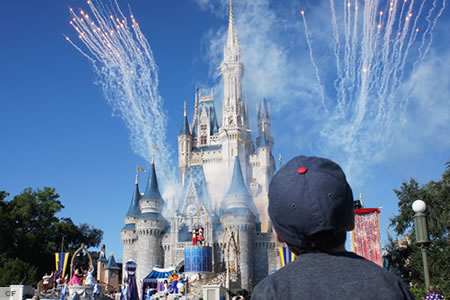 The words ‘photos’ and ‘vacation’ go together much better than ‘managing’ and ‘vacation’. But with today’s devices, we’ve come to accept there’s a little work to having so much technology at our finger tips. My family and I just returned from an amazing trip to Disney World in Orlando. Part of our efforts to refresh and truly escape from work was to avoid bringing laptops. Yet, with just our camera, an iPad and the hotel’s wifi, we were able to upload photos each night and easily share them with family. Here’s how:

The Photo Service
This is the website used to organize, share, view and store your photos. We use Facebook a lot, my wife especially. However, the photo sharing process for vacation photos is tricky. If you post photos while you’re away, you are essentially amplifying to the world that you aren’t home. Also, we’ve seen quality be an issue with Facebook, and we wanted our photos backed up in full resolution in case something happened to our camera or iPad while traveling. Before our trip, I took a cue from my dad and looked at Google’s Picasa (now called Web Albums). With it’s tie-in to Google+, I set up an album and shared it with just my family “circle”. This not only meant that just accounts in my family could view the photos, it also enabled notifications letting them know when photos had been uploaded. Google gives you 1GB free storage, so I upgraded to 200GB for just $50/year.

The iPad and Camera
I brought along an iPad 2 with the Camera Connection Kit (CCK), which allows you to connect either an SD card or the camera itself (via USB) to the iPad. Upon connection, the iPad recognizes photos (actually photos and video in the DCIM folder on the SD Card) and lets you import them into the iPad. One draw back (and a fairly common issue) is that our camera (a Sony NEX 5) stores video in a separate folder. Without a laptop, we had no way to move videos into a place where the iPad can see them. Once imported though, the photos can be left on the SD card or deleted. Just seeing the photos on the iPad in the standard viewer is a treat — sort of reliving those moments in 1024×768, swipe-able glory each night reinforces the fun times you had during the day.

The iPad App
Once Picasa was all setup, I needed to bridge the experience to my iPad. There are several apps that extend Picasa, and based on reviews and price, I chose Web Albums ($2.99) by Pixite. The Web Albums app has you login to Picasa and pulls down thumbnails of all our albums. You can view the photos, manage them within albums and define who the photos get shared with. You can import photos from your iPad (either from the camera roll or via the iPad’s camera). As you upload photos, you choose an album and you can even add a caption. One very important feature is the ability to upload the photos in their full resolution. This means the photos are backed up in a way that you can print, crop or edit them in the future.

The nightly routine
Having free wifi in the hotel was unexpected. I knew to expect in-room internet, but the wifi was excellent. It was very reliable and only slow on the upload speeds. Each night, after we settled in, I would import all photos on to the iPad. [I took 700 photos overall, and uploaded 100 of them.] I would go through all the photos, select the best ones and upload them to our Disney album on Picasa. Since I had plenty of SD cards, there was no need to remove photos off of them — but that certainly was an option.

Extras
I talked with my dad when we got back from our trip. He thanked me for sharing the photos with him and was thrilled to follow along each day. To begin enjoying the photos at home, I added the Picasa album to our litl webbook Media Wall and we were able to view an instant slide show. Overall, it was great to have everything woven together, knowing after each day that our memories were safely backed up and shared with the right group of people. With a little planning ahead, you should be able to enjoy and capture your vacation with less technology in hand.